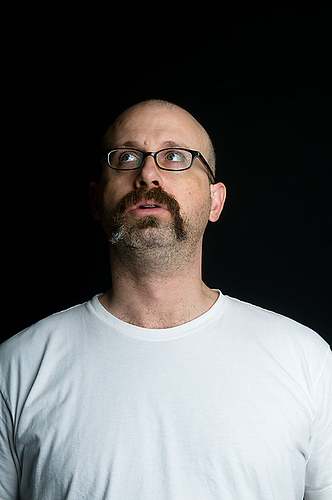 I was born in 1966 and raised by hippies. Rather than follow in my parents’ footsteps for my choice of lifestyle and music, I elected to adopt a more pessimistic approach- in other words, punk rock. I’ve drawn and painted since childhood, and was able to make use of what skills I had creating album covers and flyer’s for shows. This direction led me to consider tattooing as a career, as the two genres shared many similar icons and symbols, or to put it another way, punk rockers really like skulls.

My influences with regards to visual arts include, but are not limited to, Greg Irons, Gilbert Shelton, Paul Mavrides, Berni Wrightson, Rick Griffin, Roualt, Max Beckmann, Otto Dix, (the “fine artists” I studied mostly in college, I couldn’t answer question one about them now, but I know they influenced me), Ed Hardy, Sailor Jerry, Mike Malone, Bob Roberts, Horiyoshi 2, Horiyoshi 3, Hokusai, Kuniyoshi.

My early years tattooing were spent trying to choose a stylistic direction, and in the process feebly attempting to mimic many popular styles. It wasn’t until later that I decided to simplify things and look to earlier practitioners of American and Japanese traditional tattooing for clues about how to best graphically present images on the human body. For the most part this means that good tattoos consist of a solidly applied black outline, liberal use of black shading, and no more than one or two additional tones in whatever color is being used. As far as the application of the tattoo itself, these are the basic rules I try to adhere to. Beyond that, I try to represent the subject I’m working on in a way that is readable and attractive, and will last as long as possible in the skin. Within these guidelines anything can be done, and I think my portfolio has examples of a lot of different kinds of images that I hope appeal to a lot of different kinds of people.

I think my clients should be treated with respect. Having someone choose me to permanently mark their body is a huge responsibility, and I take it very seriously. I hope I give equal consideration to every ones design ideas, regardless of whether it is something that I might like for myself or not. Getting a tattoo is an important decision and should be treated as a permanent one, independent of advances in laser tattoo removal technology. Having said this, I love my job! I have so much fun every day, I love my customers, enjoy working with and on them, and I hope it shows in my tattoos.